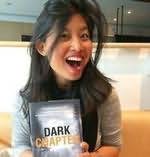 Winnie M. Li is a writer, producer, and activist.  And frequent backpacker who has somehow managed to spend the past 15 years, engaged in film and literature in various parts of the world.

Taiwanese-American and raised in New Jersey, Winnie studied Folklore and Mythology at Harvard, specializing in Celtic Languages and Literature.  In 2000, she was selected as a George Mitchell Scholar and earned her MA in Anglo-Irish Literature at the National University of Ireland, Cork.