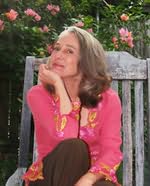 (b.1952)
Nevada Barr is a mystery fiction author, known for her "Anna Pigeon" series of mysteries, set in National Parks in the United States. She grew up in Johnsonville, California. In 1984 she published her first novel, Bittersweet, a bleak lesbian historical novel set in the days of the Western frontier.

Novellas
Summer and Smoke and Murder (2011)

Fall Guy (2004)
(Rachel Alexander and Dash, book 7)
Carol Lea Benjamin
"A well crafted mystery - Alexander is someone who holds your interest and makes you keep turning the pages."

Heartbroke Bay (2010)
Lynn D'Urso
"D'Urso has not only spun a great tale but captured both Alaska's power and mystery, no mean feat."

A Solitude of Wolverines (2020)
(Alex Carter , book 1)
Alice Henderson
"What a treat! Alice Henderson has delivered a treasure of a novel--and, to readers' delight, a promise of more where this came from. Her depiction of the natural world in all its beauty and terror is spot-on. Into this she weaves a cast of characters both original and fascinating, as well as a heroine who does the unbelievable, yet one can believe it. A great read!"
Visitors to this page also looked at these authors
David Baldacci
C J Box
J A Jance
Lee Child
Michael Connelly
John Sandford
Steve Berry
Catherine Coulter
Harlan Coben
Janet Evanovich
M C Beaton
Dana Stabenow
Robert Crais
Patricia Cornwell
Sandra Brown
James Lee Burke