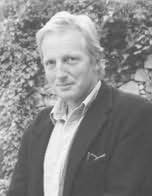 (b.1948)
Sam Llewellyn worked as an editor and fine art dealer until he decided that life was too short. Since then, his novels, published in twelve languages, have earned him a reputation as one of the world's master storytellers and writers of maritime thrillers. Many of his books are founded in personal experience. While researching them he has (amongst other things) chased pirates in the South China Sea, raced big-money multi-hulls in France, and run away from cocaine dealers in Spain.

As well as writing novels, Llewellyn has published half a dozen children's books, and works as a journalist for British and American newspapers and magazines such as the London Times and Daily Telegraph. He is a keen gardener, with added interests in ornithology and history and has also sailed yachts - several of which he built himself - all over the world. He now lives with his wife, award-winning children's writer and novelist Karen Wallace, and their two sons in a medieval house in the Welsh border country.