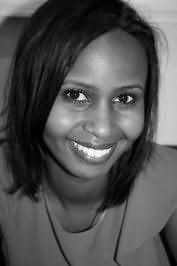 Somalia (b.1981)
Nadifa Mohamed was born in Hargeisa (now in the Republic of Somaliland) in 1981 and moved as a child to England in 1986, staying permanently when war broke out in Somalia.

She lives in London and her first novel, Black Mamba Boy, based on her father's memories of his travels in the 1930s, was published in 2010. It was longlisted for the Orange Prize for Fiction and the Dylan Thomas Prize and shortlisted for the John Llewellyn-Rhys Memorial Prize and the Guardian First Book Award. It won the 2010 Betty Trask Prize.
Novels
Black Mamba Boy (2010)
Milk and Peace (2011)
The Orchard of Lost Souls (2013)
The Fortune Men (2021)