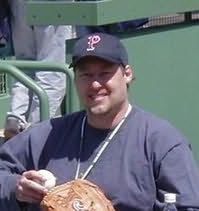 (b.1961)
Stewart ONans award-winning fiction includes Snow Angels, A Prayer for the Dying, Last Night at the Lobster, and Emily, Alone. His most recent novel, The Odds, was hailed by The Boston Globe as a gorgeous fable, a stunning meditation and a hope-filled Valentine.

Granta named him one of Americas Best Young Novelists. He was born and raised and lives in Pittsburgh.

Collections
In the Walled City (1993)

Hidden (2004)
Paul Jaskunas
"'All a lie needs is telling,' Paul Jaskunas writes, and his thoughtful narrator, Maggie Wilson, is living proof. She peels away the layers surrounding her own near-murder and resurrection so calmly it gives you chills. Hidden is a shifty, low-key thriller, half Spellbound, half Daphne du Maurier."

Dizzy City (2007)
Nicholas Griffin
"From the trenches of the Great War to Tin Pan Alley and the Great White Way... this is the best sort of historical drama."

The Rowing Lesson (2007)
Anne Landsman
"Like Joyce or William Gass or John Edgar Wideman, Anne Landsman fashions a sensual web of memory and desire, rescuing a world at the brink of extinction through the power of her lyricism."

Keeper and Kid (2008)
Edward Hardy
"A fine, fetching novel with a good heart. Keeper is nimble and affecting, a tribute to the author's endless comic inventiveness."

Right of Thirst (2009)
Frank Huyler
"Brilliant, start to finish. The voice is an achievement, and the world of emotion Huyler delivers. It's clear and deep and wise, and very few contemporary novels can make that claim."

The Painted Darkness (2010)
Brian James Freeman
"The tone and building dread reminds me of classic Stephen King. Great velocity and impact, and super creepy. Don't go in the basement!"

No Space for Further Burials (2010)
Feryal Ali Gauhar
"In writing through the eyes of an American captive in Afghanistan, Feryal Ali Gauhar has fashioned a fascinating two-way mirror in which we see the author creating an Other confronting Otherness. As in Richard Powers' hostage novel Ploughing in the Dark, the mask of character reveals as much as it conceals."

The Revised Fundamentals of Caregiving (2012)
Jonathan Evison
"Sly and surprising... both a goofy road trip and a mission of atonement."

Where the Dead Sit Talking (2018)
Brandon Hobson
"Weird and intimate, like Ottessa Moshfegh's Eileen, Where the Dead Sit Talking takes us to a strange, dangerous place normally kept hidden. From the opening hook, with the unhurried authority of a master, Brandon Hobson initiates the reader into the secret lives of lost and unwanted teenagers trying to survive in an uncaring world. Creepy, sad, yet queerly thrilling."

How to Be Safe (2018)
Tom McAllister
"Vicious, hilarious, shocking and sad, How to Be Safe is biting political satire that levels its targets, soft and hard. Tom McAllister's vision of a violent, pious, hysterical America is worthy of Denis Johnson, Margaret Atwood and, yes, Mark Twain."

The Girl From Blind River (2018)
Gale Massey
"Smart, sharp and fast, Gale Massey's thriller ratchets up the action, making the reader lean forward till the turn of her last card."

Afterlife (2020)
Julia Alvarez
"From the very beginning, Julia Alvarez has proven herself a wise and funny writer with a sharp eye and ear for the joys and obligations of love and family. Now, in Afterlife, she applies her gifts to last things, as her Antonia struggles to move beyond the consolations of poetry and embrace the buzzing, blooming confusion of the world again."

The Heebie-Jeebie Girl (2020)
Susan Petrone
"The simple, desperate act that opens The Heebie-Jeebie Girl quickly turns complicated and dangerous. Susan Petrone has penned an open-hearted love letter to a still-proud city whose mills and bars used to operate around the clock, where jobs are scarce and people dream of hitting the lottery. A novel of magic and miracles, contrition and forgiveness, it's fitting that its hero, who can pick lucky numbers out of thin air, is named Hope. As Youngstown itself says: 'Some cities will chew you up and spit you out. Not me.'"