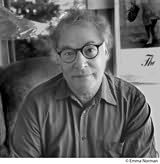 (b.1949)
Howard A. Norman, is an American award-winning writer and educator. Most of his short stories and novels are set in Canada's Maritime Provinces. He has written several translations of Algonquin, Cree, Eskimo, and Inuit folklore. His books have been translated into 12 languages.

The Poison Artist (2016)
Jonathan Moore
"With The Poison Artist, Jonathan Moore has given us a brilliant debut thriller, confident, mesmerizing, edgy and very cool. So much happens on every page, it's almost dizzying. Hitchcock should come back from the grave and film this story."

Broken Wing (2016)
David Budbill
"A rusty blackbird and The an Who Lives Alone in the Mountains are both signature characters from hermit-obsessed mind and heart of David Budbill. All of his life David Budhill has paid homage to this iconic poet recluses of China by imparting their philosophical dignity, eccentricity, and spiritual probity into his beloved north country. Broken Wing is both a continuation of that project--and an autonomously haunting allegory. A prolific and passionate writer, a beautiful story."

Visible Empire (2018)
Hannah Pittard
"Hannah Pittard knows that Faulkner was right: the past is never dead - it isn't even past. In her stunning novel, Visible Empire, she brings harrowing incidents from 1962 into the present with the vivid immediacy of a documentary film. Writing of love, family, race, devastating loss, redemption, riveting mysteries revealed, Pittard composes a grand symphony of profound incidents and passages of life—a compassionate, spellbinding novel."