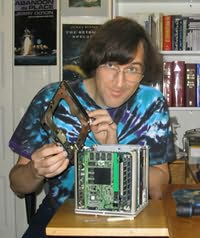 (b.1957)
Jerry Oltion is the author of ABANDON IN PLACE, THE GETAWAY SPECIAL, ANYWHERE BUT HERE, and PARADISE PASSED, plus several Star Trek books and over a hundred short stories in various magazines and anthologies. He is the most prolific contributor to Analog magazine in the last 25 years, and the third most prolific of all time. (Yes, he's shooting for #1.) His novella version of "Abandon in Place" won the Nebula Award in 1998. Jerry also writes under the name "Ryan Hughes." He is an amateur astronomer, which led him to spend most of a year designing and building a new type of telescope he calls the "trackball." He lives in Eugene, Oregon, with his wife, Kathy, and the obligatory writer's cat, Stormy.