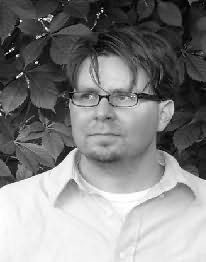 Christopher Ransom was born and raised in Boulder, Colorado, but he doesn't eat hamburgers made of vegetables or drive an SUV with a Save the Planet bumper sticker.

After studying literature at Colorado State University, he won citations for outstanding customer service at the world famous McGuckin Hardware, and later managed Bushmaster Reptiles, an international wholesale importer of exotic species. There he learned to handle, feed, and medicate pythons, boas, vipers, cobras, monitor lizards, and hundreds of other fauna native to Indonesia, Africa, China, and the Americas.

At the age of 25, Chris and his soon-to-be wife Pia moved to New York City for two years, where he worked as an ad sales assistant at Entertainment Weekly, and later as a sales executive for Screaming Media. Approximately six months prior to the firm going public, he made the brilliant financial decision to move to Los Angeles to pursue a screenwriting career. There he sold not a single screenplay, but continued to ride the dot-com wave, managed a Barnes & Noble store, freelanced as a copywriter, and ate a lot of tacos at Baja Fresh.