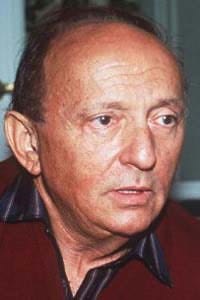 (1916 - 1997)
Father of Adréana Robbins
Harold Robbins was a best-selling author whose novels about sex, money and power were scorned by critics and loved by readers. Raised in a New York orphanage, Robbins dropped out of school at the age of 15 and used his entrepreneurial skills to become a millionaire by the age of 20. His fortune quickly evaporated and in 1937 he went to work as a shipping clerk for Universal Pictures in Hollywood. Robbins worked his way up to the executive level and began writing novels. In 1948 he had a hit with Never Love a Stranger, and in the 1950s he began writing novels full-time. Several of his books were bestsellers, including The Carpetbaggers (1961) and The Betsy (1971), both of which were made into movies.

Black Magic in New York (1970)
(Malko Linge, book 2)
Gérard de Villiers
"These are tremendous tales of high adventure and espionage-I urge you to read them."

Generation of Victors (1973)
Burt Hirschfeld
"Hirschfeld is in the front ranks of America's storytellers."

The Big Biazarro (1977)
Leonard Wise
"The Climax is a heart-pounder... should blast you right out of your seat."