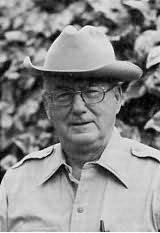 (1914 - 1996)
Gordon Sheriffs published more than 80 western novels, 20 ofthem juvenile books, and John Wayne bought his book title, Rio Bravo, during the 1950s for a motion picture, which Shirreffs said constituted the most money I ever earned for two words. Four of his novels were adapted to motion pictures, and he wrote a Playhouse 90 and the Boots and Saddles TV series pilot in 1957.

A former pulp magazine writer, he survived the transition towestern novels without undue trauma, earning the admiration of his peers along the way. The novelist saw life a bit cynically from the edge of his funny bone, and described himself as looking like a slightly parboiled owl. Despite his multifarious quips, he was dead serious about the writing profession.