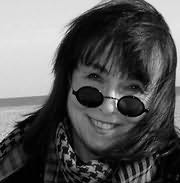 Jillian Stone was born a storyteller. A skill that got her into considerable trouble as a youth until she solved the problem by becoming an advertising creative. And the career did seem to suit her as she won many national ad awards including the Clio and the New York Art Director’s Club Gold. What more could she ask for? Create her own worlds? Become goddess of her own universe? Yes! So, she began to write fiction. Her Victorian Romantic Suspense novel AN AFFAIR WITH MR. KENNEDY won the 2010 Golden Heart and sold to Pocket Books. Her sexy, supernatural Steampunk novel, THE SEDUCTION OF PHAETON BLACK, won the 2010 Romance Through The Ages Erotica category and sold to Kensington Brava. Jillian lives in California and is currently working on the next adventure for both series.