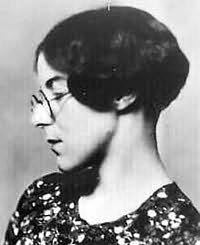 (1893 - 1978)
Sylvia Townsend Warner was born at Harrow on the Hill, the only child of George Townsend Warner and his wife Eleanora (Nora) Hudleston. Her father was a house-master at Harrow School and was, for many years, associated with the prestigious Harrow History Prize which was renamed the Townsend Warner History Prize in his honor, after his death in 1916. As a child, Sylvia seemingly enjoyed an idyllic childhood in rural Devonshire, but was strongly affected by her father's death.

She moved to London and worked in a munitions factory at the outbreak of World War I. She was friendly with a number of the "Bright Young Things" of the 1920s. Her first major success was the novel Lolly Willowes. In 1923 Warner met T. F. Powys whose writing influenced her own and whose work she in turn encouraged. It was at T.F. Powys' house in 1930 that Warner first met Valentine Ackland, a young poet. The two women fell in love and settled at Frome Vauchurch in Dorset. Alarmed by the growing threat of fascism, they were active in the Communist Party of Great Britain, and visited Spain on behalf of the Red Cross during the Civil War. They lived together from 1930 until Ackland's death in 1969. Warner's political engagement continued for the rest of her life, even after her disillusionment with communism. She died on 1 May 1978.
Novels
Lolly Willowes (1926)
Mr Fortune's Maggot (1927)
The True Heart (1929)
This Our Brother (1930)
Summer Will Show (1936)
After the Death of Don Juan (1939)
The Corner That Held Them (1948)
The Barnards of Loseby (1954)
The Flint Anchor (1954)
The Cat's Cradle (1960)