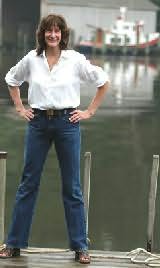 Lucia St. Clair Robson has been a Peace Corps Volunteer, a teacher and a librarian. Her first historical novel, RIDE THE WIND, appeared on the New York Times best seller list, and in 1983 received the Golden Spur Award from the Western Writers of America. Since then she has written seven more novels set in a variety of times and places. Kirkus Reviews wrote, "Few novelists working today have a better grasp of early American history than Robson.""