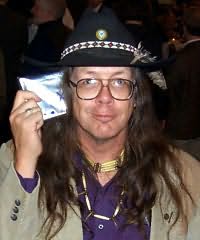 (b.1942)
William Sanders was born in 1942. A graduate of Arkansas A&M College, he served in the US Army Security Agency from 1963 through 1966. Besides soldiering, he has at various times worked as a musician, shipping clerk, construction laborer, encyclopedia salesman, traveling preacher, and dishwasher at the New York Stock Exchange cafeteria. In 1973 he began writing for publication, first in nonfiction - eventually publishing four books on sports and outdoor subjects, as well as articles and columns in sports magazines - and then, in 1988, turning to speculative fiction.

His first published novel, the alternate-history comedy Journey to Fusang, was critically praised and got a nomination for the John Campbell Award. Since that time he has published several other SF novels, as well as mysteries and suspense thrillers. His short fiction has appeared in major magazines and anthologies and been nominated for various awards, including the Hugo and the Nebula; in 1998 his short story "The Undiscovered" received the Sidewise Award for Alternate History.