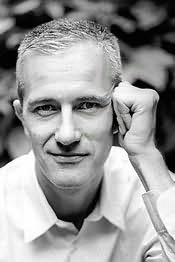 (b.1958)
Geoff Dyer is the author of four novels and six other nonfiction books, including But Beautiful, which was awarded the Somerset Maugham Prize, and Out of Sheer Rage, which was a National Book Critics Circle Award finalist. The winner of a Lannan Literary Award, the International Centre of Photography's 2006 Infinity Award for writing on photography, and the American Academy of Arts and Letters' E. M. Forster Award, Dyer is a regular contributor to many publications in the UK and the US. He lives in London.
Novels
The Colour of Memory (1989)
The Search (1993)
Paris Trance (1998)
Jeff in Venice, Death in Varanasi (2007)

The Dog Fighter (2004)
Marc Bojanowski
"The most exciting debut by an American writer since Jeffrey Eugenides' The Virgin Suicides.... Relentless and remarkable."

The Largesse of the Sea Maiden (2018)
Denis Johnson
"The secret of all this is the shifting wattage, the slipshod magnificence and crazy wonder of the Johnsonian sentence. Clause by clause, word by word, anything becomes plausible. . . . Whatever Johnson had gone through, however he expressed it on the page, it would all have been wasted had it not ended up being funny, because then a major percentage of wisdom would have been missing. . . . He led a certain life and found ways of giving expression to that life."
Visitors to this page also looked at these authors
Stuart Dybek
Sam Eastland
Chris Dyer
Cindy Dyson
Heidi W Durrow
Nick Dybek
Elanor Dymott
Warren C Easley
Rachel Dylan
Amanda Dykes
Ashley Dyer
John Varley
William Trevor
Walter Tevis
Sheri S Tepper
Sax Rohmer