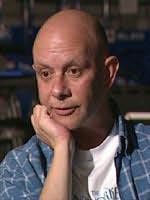 (b.1957)
Nick Hornby was born in 1957. His father, Sir Derek Hornby, was a successful businessman. Hornby junior went to Maidenhead Grammar School then studied English at Cambridge. After teaching in Cambridge, he worked for the Korean electronics giant Samsung as a meeter and greeter for their executives in the UK.

Plays
An Education: The Screenplay (2009)

Series contributed to
Open Door Series 5
Not a Star (2006)

Anthologies edited
My Favourite Year (1993)
Speaking with the Angel (2000)

Room Temperature (1990)
Nicholson Baker
"Short, and funny, and bright as a button."

Pompey (1993)
Jonathan Meades
"The product of a brilliant mind"

The Beach (1996)
Alex Garland
"THE BEACH is fresh, fast-paced, compulsive and clever - a LORD OF THE FLIES for the Generation X. It has all the makings of a cult classic."

Feed (2002)
M T Anderson
"Another book that can be added to the list entitled 'YA Novels I'd Never Heard of But Which Turn Out to Be Modern Classics' and Feed may well be the best of the lot... Funny, serious, sad, superbly realized."

We're in Trouble (2005)
Christopher Coake
"Sometimes, when you're reading these stories, you forget to breathe."

Sharp Teeth (2007)
Toby Barlow
"As ambitious as any literary novel, because underneath all that fur, it's about identity, community, love, death, and all the things we want our books to be about."

One Day (2009)
David Nicholls
"Big, absorbing, smart, fantastically readable . . . brilliant on the details of the last couple of decades of British cultural and political life . . . the perfect beach read for people who are normally repelled by the very idea of beach reads."

The Financial Lives of the Poets (2009)
Jess Walter
"It made me laugh more than any other book this year."

Red Plenty (2010)
Francis Spufford
"A hammer-and-sickle version of Altman's Nashville, with central committees replacing country music . . . [Spufford] has one of the most original minds in contemporary literature."

The Trouble with Lexie (2016)
Jessica Anya Blau
"Blau has a steady nerve, as well as a wicked imagination...It takes you a little while to realize that you're reading is a top-notch comic writing, because you're getting all the stuff you normally get in literary fiction as well; rites of passage, the complications of fractured families, the works."

We Run the Tides (2021)
Vendela Vida
"We Run the Tides is smart, perceptive, elegant, sad, surprising and addictive. And it’s also FUNNY. Who knew that you could combine all of those qualities into one slim volume? Not many writers, that’s for sure. I loved every single page, and was sorry when I had to say goodbye to Eulabee and her family."
Visitors to this page also looked at these authors
Anthony Horowitz
Khaled Hosseini
Alice Hoffman
Paula Hawkins
Tami Hoag
John Grisham
Robert Harris
Carl Hiaasen
Stephen King
Joe Hill
Kate Atkinson
John Irving
Dean Koontz
Jack Higgins
Elin Hilderbrand
Robin Hobb