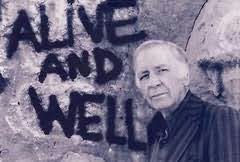 (1906 - 1977)
Jim Thompson was born in Anadarko, Oklahoma. After an itinerant childhood during which his sheriff father was driven from office for embezzlement; and as a roughneck in the Texan oil fields of the 1920s, Thompson's leftist leanings were galvanized, leading to his membership of the Wobblies and the Communist Party. He became successful as a writer with the pulp fiction houses of the 1950s, writing a dozen of his more enduring novels in just 19 months.

Among his many novels are The Killer Inside Me, The Grifters, The Getaway and After Dark, My Sweet. He also wrote two screenplays (for the Stanley Kubrick films The Killing and Paths of Glory). Pop. 1280 was an acclaimed French film under the title Coup de Torchon.