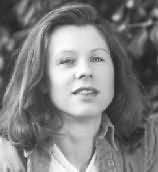 (b.1964)
Born in Derbyshire in 1964, Jane Welch was educated at Repton Prep School in Derbyshire and three separate public schools at a time when each was making the awkward transition from boys-only establishments to co-ed schools. While happily playing the role of "angry young woman", she revolted against the public schools' Oxbridge system and immediately after leaving school married Richard, a "rebel without a cause" whom she had disastrously embraced at her first public school. After working in Heffers Booksellers for a short while and running her own small business, she pulled Richard out of publishing and together they spent five winters teaching skiing in Soldeu, Andorra in the Pyrenees. Summers were spent less idyllically labouring in circumstances that would have been familiar to Tess of the Durbervilles, giving the impetus to achieve her childhood dream of writing. She completed her first novel, The Runes of War whilst in Andorra but after HarperCollins made an offer for that and the rest of the Runespell Trilogy writing took over. The Runes of War was published in December 1995, The Lost Runes in October 1996 and The Runes of Sorcery in May 1997. Though very happy and thankful for all the support and guidance provided by Jane Johnson and Joy Chamberlain at Harper Collins, the opportunity to join John Jarrold and his new list at Simon & Schuster with her second trilogy, The Book of Ond, was impossible to ignore. "The Lament of Abalone" was published on 1 June 1998. The second volume is due for publication in early 1999 and the last in early 2000. Jane lives in Somerset with Richard and their two small and very much adored children, Harriet and George.
Series
Runespell
1. The Runes of War (1995)
2. The Lost Runes (1996)
3. The Runes of Sorcery (1997)