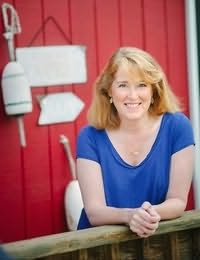 BRENDA BOWEN read Pride and Prejudice in one sitting when she was twelve and has never quite recovered. She is devoted to Jane Austen, Mary Wesley, Philip Roth, Charlotte Bronte, Emily Dickinson, Billy Collins, Billy Shakespeare, Billie Holliday, Billy Wilder, and many other people named Billy. She lives and writes on Manhattans Upper West Side. Her favorite food in all the world is the blueberry.

If you are curious as to how Brenda got the idea for Enchanted August, this is what she says: I almost never watch a movie based on a book before reading the book, but in the case of Enchanted April (the movie) I didnt even know there was The Enchanted April (the book by the incomparable Elizabeth von Arnim). I saw the movie, loved it, read the book, loved it more and every time I watched the film or read the novel I thought 'This story could be happening now. I wanted to read the updated version of The Enchanted April so much that I wrote it myself.

Brenda was born in Philadelphia, grew up in England (from Hermans Hermits to Queen to the Clash), was graduated from Colby College, made her career in New York, and longs for a cottage in Maine.