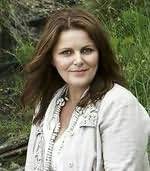 Denmark (b.1964)
Sara Blædel is one of Denmark's most successful crime writers and a leading representative of the Scandanavian crime writing tradition. Her novels appear in ten languages and the film rights to them have been sold. Sara's route to becoming 'Queen of Crime' has not been without obstacles and was not perhaps written in the stars. But a combination of personal strength, life's coincidences and a powerful passion for crime fiction since childhood has brought her to the position she enjoys today.

What My Body Remembers (2017)
Agnete Friis
"A tense and riveting thrill ride."