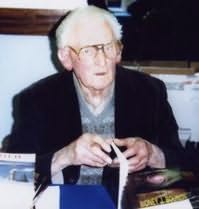 aka S J Bounds, Earl Ellison, Rex Marlowe, James Marshal, Wes Sanders, Clifford Wallace
Sydney James Bounds was an English author. He wrote as Sydney J. Bounds and S. J. Bounds, as well as under the pen names Clifford Wallace, James Marshall, Earl Ellison and Rex Marlowe. He wrote over forty novels and hundreds of short stories, many published under pseudonyms or anonymously. He was best known for his science fiction, but also wrote horror, Westerns, mysteries and juveniles.

Bounds was unmarried. He lived in Kingston upon Thames until May, 2006, when he moved to Telford, Shropshire. Hospitalized in fall of that year, he died on November 25, 2006 at the age of 86. Starting in 2007 his name has been honored by the British Fantasy Awards' Sydney J. Bounds Best Newcomer Award (a revival of the earlier Icarus and Newcomer Awards), which is sponsored and funded by his estate.