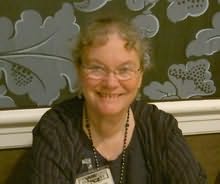 (b.1943)
Diana L. Paxson is a writer of fantasy living in the literary household called Greyhaven in Berkeley, California. She has sold over seventy short stories, many of them to anthologies such as the Sword & Sorceress series, Elf Fantastic, Wizard Fantastic, and many more.

She is the author of the Chronicles of Westria, and nine historical fantasies, including The White Raven (a mainstream fantasy based on the legend of Tristan and Iseult), the Wodan's Children trilogy, which tells the story of Sigfrid and Brunhild (The Wolf and the Raven, Dragons of the Rhine, and The Lord of Horses.) Also now in print are all three volumes of a trilogy on the Irish hero Fionn MacCumhal (a collaboration with Adrienne Martine-Barnes), Master of Earth and Water, The Shield Between the Worlds, and Sword of Fire and Shadow. Her Arthurian novel The Hallowed Isle is appearing in four trade paperback volumes: The Book of the Sword, The Book of the Spear, The Book of the Cauldron, and The Book of the Stone. All four will also appear in a single hardcover volume as a Science Fiction Book Club alternate.

In addition to her writing, Paxson plays and composes music for the folk harp (The Wandersong, a tape of music from the Westria series, is now available), and designs and sews period costumes. She has served as Western Regional Director of the Science Fiction & Fantasy Writers of America, and is currently on the Boards of Directors of the Fellowship of the Spiral Path and the Ring of Troth.