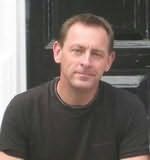 A pseudonym used by David Harrison
Tom Bale has had a variety of jobs including retail assistant, claims negotiator and project manager, but none was as exhausting as the several years he spent as a househusband with two pre-school children. Tom has been writing since the age of seven, and completed his first novel at fifteen. After twenty years and hundreds of rejection slips he landed an agent and a book deal with Random House, and he now writes full-time.

He lives in Brighton with his family and swims in the sea as often as the weather permits. He also enjoys walking, cycling and reading, and he probably spends far too much time on the internet.