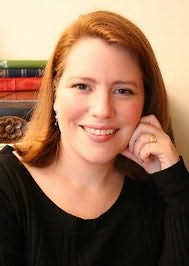 SUSANNA CALKINS became fascinated with seventeenth-century England while pursuing her doctorate in British history. A former pirate, she once served on the Golden Hinde--a museum replica of Sir Frances Drake's ship--now dry docked in the Thames.

Originally from Philadelphia, Calkins now lives outside of Chicago with her husband and two sons. The Murder at Rosamund's Gate, featuring Lucy Campion, is her first novel.

No Cure for the Dead (2018)
(Florence Nightingale Mystery, book 1)
Christine Trent
"Mystery meets medicine in No Cure for the Dead, Christine Trent’s absorbing tale - a suspense-filled reimagining of the historic Florence Nightingale as a resolute sleuth, determined to keep both murderers and illness at bay. Weaving in authentic period details, Trent offers a fascinating glimpse into the grim world of nineteenth-century nursing, as well as the larger social conflicts of the day. Overall, an intriguing, well-crafted and satisfying read!"