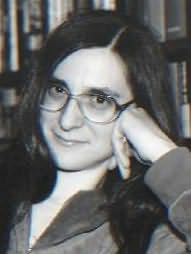 (b.1946)
Phyllis Eisenstein was born in Chicago in 1946 and, except for two years in Germany and one winter in Upper Michigan as an Air Force wife, has spent her life there. In her early student days, she worked as a butcher, grocery clerk, bowling alley pin-setter, and tutor. She dropped out of college to join her new husband Alex overseas, eventually selling two stories in 1969, the first being a collaboration with Alex that appeared in Robert Silverberg's New Dimensions 1. Ten years later, after her third novel was published, she went back to school to acquire a degree in Anthropology from the University of Illinois.

Phyllis got her first taste of teaching while assisting Roger Zelazny at the Indiana University Writers Conference in 1977 and went on to teach SF and fantasy writing at the Clarion Science Fiction Writers Workshop, Oakton Community College, and the Writers Digest School. For more than a dozen years she has been a member of the faculty of Columbia College Chicago, where she also edited two volumes of Spec-Lit, a soft cover anthology showcasing SF by her students and others, which sold through bookstores nationally. In 1999, the school honored her with its "Excellence in Teaching" Award.

Both alone and with Alex, she has published six novels and about three-dozen shorter works in the science fiction, fantasy, and horror genres, as well as a popular nonfiction book on treating arthritis. Her stories have been nominated twice for the Hugo Award, three times for the Nebula. In her spare time she plays solitaire, writes the occasional book review, and reads widely in a vast array of arcane and not-so-arcane subjects.

Though not a practicing mystic, as Madame Klein she has long read Tarot cards at parties and science fiction gatherings, putting her early psych training to good use and astounding the skeptical with her results.

For the last two-and-a-half years, she has worked as copyeditor at a major ad agency in Chicago. Novel number seven, and her first story collection, will come out later this year.