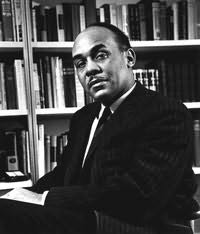 (1914 - 1994)
Ralph Ellison was a scholar and writer. He was born Ralph Waldo Ellison in Oklahoma City, Oklahoma, named by his father after Ralph Waldo Emerson. Ellison was best known for his novel Invisible Man, which won the National Book Award in 1953. He also wrote Shadow and Act (1964), a collection of political, social and critical essays, and Going to the Territory (1986). Ellison references music in his novel having once thought of becoming a composer himself - he took a few lessons from an early admirer of Schoenberg, Wallingford Riegger, but stopped. Research by Lawrence Jackson, one of Ellison's biographers, has established that he was born a year earlier than had been previously thought.