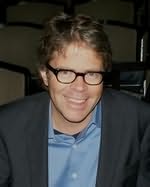 (b.1959)
Jonathan Franzen was born near Chicago in August, 1959, and grew up in Webster Groves, Missouri, a suburb of St. Louis. After graduating from Swarthmore College, in 1981, he studied at the Freie Universität in Berlin as a Fulbright scholar and later worked in a seismology lab at Harvard University's Department of Earth and Planetary Sciences.

The Deader the Better (2000)
(Leo Waterman, book 6)
G M Ford
"I am utterly beguiled by G.M. Ford's Leo Waterman... Ford writes with a toughness leavened by grace and wit."

Assorted Fire Events (2000)
David Means
"Means's stories are harrowing and funny and full bloodied... this is food for the hungry."

The Savage Girl (2001)
Alex Shakar
"An exceptionally smart and likeable first novel that tries valiently to ransom Beauty from its commercial captors."

The Lovely Bones (2002)
Alice Sebold
"Sebold has given us a fantasy-fable of great authority, charm, and daring. She's a one-of-a-kind writer."

Kapitoil (2010)
Teddy Wayne
"Kapitoil is one of those uncommon novels that really is novel. Though the storytelling is conventional, it is satisfyingly so, and the book's estimable young narrator is a human type whom nobody until Wayne was ever inspired to write about."

The Middlesteins (2012)
Jami Attenberg
"The Middlesteins had me from its very first pages, but it wasn't until its final pages that I fully appreciated the range of Attenberg's sympathy and the artistry of her storytelling."