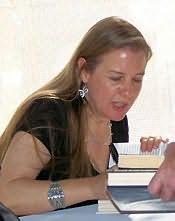 (b.1955)
Janet Fitch is most famously known as the author of the Oprah's Book Club novel White Oleander, which became a film in 2002. She is a graduate of Reed College, located in Portland, Oregon.

Janet Fitch was born in Los Angeles, a third-generation native, and grew up in a family of voracious readers. As an undergraduate at Reed College, Fitch had decided to become an historian, attracted to its powerful narratives, the scope of events, the colossal personalities, and the potency and breadth of its themes. But when she won a student exchange to Keele University in England, where her passion for Russian history led her, she awoke in the middle of the night on her twenty-first birthday with the revelation she wanted to write fiction.

Moonpies and Movie Stars (2006)
Amy Wallen
"With a pitch-perfect ear for comic dialogue and a fine sense of the absurd, Amy Wallen writes herself a place on the porch swing of great Southern writing."

The Magnificent Esme Wells (2018)
Adrienne Sharp
"Adrienne Sharp brilliantly recreates the tawdry magic of twin dream machines, studio-era Hollywood and early Las Vegas, in this tale of . . . the scrappy, precocious Esme Wells, her go-for-broke parents, and the toll these dreams took on their dreamers."

The Captives (2018)
Debra Jo Immergut
"Debra Jo Immergut's psychological thriller had me captivated from the first page. Its two lost souls come together like the meeting of nitrogen and glycerine, a desperate female prisoner and a prison psychologist about to cross the line. A mesmerizing debut."

The Stranger Game (2018)
Peter Gadol
"'Following’ gets a whole new meaning in Peter Gadol’s stylish psychological thriller set in the future of the day-after-tomorrow. A moody, increasingly dangerous house of mirrors where the rules morph as his players become more obsessed with 'the stranger game'."

142 Ostriches (2020)
April Dávila
"An unusual ranching tale set in the Mojave Desert, where the herd is a flock of eight foot tall birds and their wrangler a young woman raised by her gruff grandmother who dreams of another kind of life. A twisty, warmhearted story of family, community and fate, a thoroughgoing delight."

The Imperfects (2020)
Amy Meyerson
"Delicious, compulsively readable... Both a gripping mystery and a family tale of imperfect people... Large gemstones have a certain magic of their own, and Meyerson expertly captures that fascination, in her wonderful tracing of the origin of the secret brooch. I read this book morning and night until it was done, unable to break free of its spell. A sheer delight."