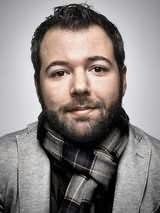 Joseph Fink created and co-writes the Welcome to Night Vale podcast and touring live show.  In his mid-twenties he started Commonplace Books, a very small publishing company, producing two collections of short works which he edited and laid out at his office job when his boss wasn't looking. Later Jeffrey approached Joseph with the idea of writing a play about time travel. They co-wrote and performed this play in the East Village in August of 2011. Soon afterwards, Joseph started brainstorming a new project he and Jeffrey could co-write and this led to the pilot episode of Welcome to Night Vale. He is from California but doesn't live there anymore.

Anthologies edited
A Commonplace Book of the Weird (2010)

An Absolutely Remarkable Thing (2018)
Hank Green
"Hank Green hasn't just written a great mystery adventure (though he has), and he hasn't just written the most interesting meditation on the internet and fame I've ever seen (but he did that too), Hank has written a book in which the page-turning story and the fascinating ideas inform and support each other. This book expands your mind while taking you on a hell of a ride."
Visitors to this page also looked at these authors
Joseph Finder
Jeffrey Cranor
N K Jemisin
Mick Finlay
Thomas Fincham
Joy Fielding
Joanne Fluke
Christine Feehan
Derek Fee
John Fairfax
Alan Dean Foster
Louise Erdrich
Paul Finch
Jasper Fforde
Sebastian Faulks
Joseph Flynn