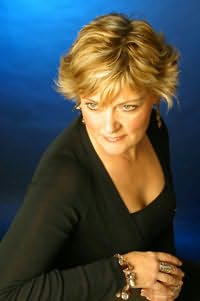 A pseudonym used by Jane Johnson
Jude Fisher is the pseudonym for Jane Johnson, who is the Publisher of HarperCollins' science fiction and fantasy list, Voyager. She has also been involved in the publishing of JRR Tolkien's works for many years.
Born in Cornwall, Jane was educated at Liskeard Grammar School and then took an English degree at Goldsmiths' College, University of London.

She also loves to travel. Favourite places include the Markar River, Bergþorshvoll and Þingvellir in Iceland; Joshua Tree, Tuolomne Meadows and the Yosemite Valley; Avebury, West Pembroke and the Peak District of England; South Island, New Zealand; and the limestone cliffs of southern Spain. But her homeland of Cornwall -- the beautiful Far West of Britain, last true land of the Celts, and the only part of the island to have defied the Roman invasion and maintain its own language, religion and culture -- will always hold the strongest spell over her.
Series
Fool's Gold
1. Sorcery Rising (2002)
2. Wild Magic (2003)
3. The Rose of the World (2005)