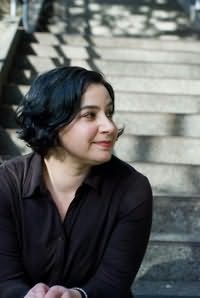 Laurie Frankel lives in Seattle with her husband, her three-year-old son, her border collie, and many, many books. She's an East coaster originally, a fact people often guess before she's even opened her mouth. Her second novel, Goodbye For Now, comes out August 7, 2012 in the U.S.  The film has been optioned and translation rights have sold in 27 territories. Laurie was just named one of ten women to watch in 2012. She is a proud core member of the Seattle7Writers. Her first novel, The Atlas of Love, came out in August 2010, so August seems to be her month. Until last June, she was teaching writing, literature, and gender studies at the college level. Now she is thrilled, honored, grateful, and occasionally terrified to be writing full-time. It's quite something.

We Own the Sky (2018)
Luke Allnutt
"Heartbreaking and devastating and complicated, We Own the Sky offers something remarkable: light in the darkest dark and redemption where there ought to be none."

Go Ask Fannie (2018)
Elisabeth Hyde
"[A] loving, raging, totally compelling family... I adored them all from the first page."

The Last Romantics (2019)
Tara Conklin
"All of the luxuriously spun characters in The Last Romantics, entwined via that impossible web we call family, unfold over their many years with the perfect balance of familiarity and wonder that makes turning their pages such a pleasure."

In the Blink of an Eye (2019)
Jesse Blackadder
"In the Blink of an Eye is at once heartbreaking but heartening, tragic but life affirming, its characters complex but familiar, its ending miraculous but well earned. It is a book of contrasts then, so it’s little wonder that even as you can’t stop rushing through, you feel it will stay with you for a very long time."

A Good Neighbourhood (2020)
Therese Anne Fowler
"A Good Neighborhood is my favorite kind of novel -- compelling, complicated, timely, and smart. With great humanity, Therese Anne Fowler imparts a full-hearted, unflinching indictment of a broken system and in so doing tells a story hard to put down and hard to forget."

Someone Else's Secret (2020)
Julia Spiro
"Someone Else’s Secret is a sandy, sun-soaked, character-driven exploration of what happens when there are no good options, when the truth turns out not to be enough, when following your heart proves impossible. It is a novel about being young and very young and then not so young after all and about finding the strength to fight for all those former selves."