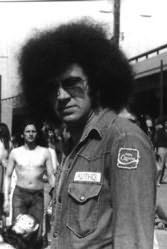 (b.1943)
Mick Farren was born in Cheltenham, England on a wet night at the end of World War II and he has been complaining about it ever since. His fiction received attention in the late punk seventies with The DNA Cowboys cult trilogy. Through the 1980s and 1990s, he tempered cyberpunk with his own post-Burroughs, post-Lovecraft strangeness, while, at the same time functioning as a columnist, critic, recording artist, teaching a science fiction and horror course at UCLA, publishing a number of non-fiction works on popular culture, including a best selling biography of Elvis Presley's manager, Colonel Tom Parker, and the bizarre-fashion history The Black Leather, and also providing Rock & Roll lyrics for bands like Metallica, Motorhead, Brother Wayne Kramer, and others. With Kramer, he created the off-Broadway musical The Last Words Of Dutch Schultz, and he has scripted a number of TV documentaries. He emerged into the 21st century with the critically acclaimed and suitably unorthodox vampire saga The Renquist Quartet, and the forthcoming alternate world epic Flame Of Evil.

Farren currently lives in Los Angeles. His most recent non-fiction is the autobiographic Give The Anarchist A Cigarette (Jonathan Cape, UK), his most recent novel is Underland (Tor Books US), and his current CDs are People Call You Crazy: The Mick Farren Story (Sanctuary UK) and The Deviants Dr Crow (Navarre US).

Series contributed to
Car Warriors
3. Back from Hell (1999)