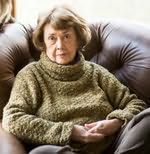 (b.1937)
Gail Godwin is a three-time National Book Award finalist and the bestselling author of twelve critically acclaimed novels, including Unfinished Desires, A Mother and Two Daughters, Violet Clay, Father Melancholy's Daughter, Evensong, The Good Husband, and Evenings at Five. She is also the author of The Making of a Writer: Journals, 1961--1963, the first of two volumes, edited by Rob Neufeld. She has received a Guggenheim Fellowship, National Endowment for the Arts grants for both fiction and libretto writing, and the Award in Literature from the American Academy of Arts and Letters. She has written libretti for ten musical works with the composer Robert Starer. She lives in Woodstock, New York.

A Land More Kind Than Home (2012)
Wiley Cash
"This novel has great cumulative power. Before I knew it I was grabbed by the ankle and pulled down into a full-blown Greek tragedy."

We Shall Not All Sleep (2017)
Estep Nagy
"This is an amazing book. It's rare to encounter such mature insight into as interesting and complex characters as these. Anyone who is fascinated by human crossovers and transformations will be thankful for We Shall Not All Sleep."

Artifact (2020)
Arlene Heyman
"This is the story of a dauntingly independent woman's compelling need to pursue the mysteries of life, including her own body. Lottie Kristin is many things: a wife, a mother, a cell biologist, and a woman willing to be discomfortingly candid. I hope Heyman writes a sequel so we can know what she does next."
Visitors to this page also looked at these authors
Janet Evanovich
Elizabeth George
Mary Gordon
Emily Giffin
Emma Donoghue
Newt Gingrich
Tess Gerritsen
John Grisham
Dorothy Garlock
Harlan Coben
Carol Goodman
Kim Edwards
Erica Bauermeister
Elizabeth Gilbert
Hazel Gaynor
Robert Galbraith