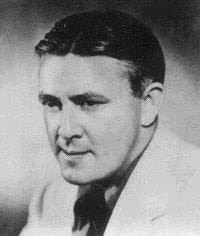 aka Glen Trevor
Born in Leigh, in Lancashire, England on 9 September 1900, James Hilton was the son of John Hilton, the headmaster of Chapel End School in Walthamstow. His father was one of the inspirations for the character of Mr. Chipping in Goodbye, Mr. Chips. (Hilton was born on Wilkinson Street in Leigh - there is a teacher in Goodbye, Mr. Chips called Mr Wilkinson.) The setting for Goodbye, Mr. Chips is believed to have been based on the Leys School, Cambridge, where James Hilton was a pupil. Chipping is also likely to have been based on W. H. Balgarnie, one of the masters of the school who was in charge of the Leys Fortnightly, where Hilton's first short stories and essays were published.

He was married and divorced twice, first to Alice Brown and later to Galina Kopineck. He died in Long Beach, California from liver cancer on December 20, 1954, aged 54.

Anthologies containing stories by James Hilton
A Century of Horror (1971)