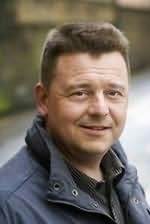 Brother of James Hilton
Matt Hilton worked for twenty-two years in private security and the police force in Cumbria. He is a 4th Dan blackbelt and coach in Ju-Jitsu. He lives in Cumbria with his wife and son.

Novellas
Mark Darrow and The Stealer of Souls (2013)

The Fear Within (2016)
(Lieutenant Danielle Lewis, book 2)
J S Law
"Tense, claustrophobic, and totally absorbing, this book should be on every thriller reader's radar - or should that be sonar? Absolutely superb."