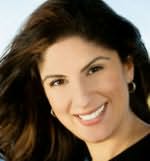 Nadia Hashimi was born and raised in New York and New Jersey. Both her parents were born in Afghanistan and left in the early 1970s, before the Soviet invasion. Her mother, granddaughter of a notable Afghan poet, went to Europe to obtain a Masters degree in civil engineering and her father came to the United States, where he worked hard to fulfill his American dream and build a new, brighter life for his immediate and extended family. Nadia was fortunate to be surrounded by a large family of aunts, uncles and cousins, keeping the Afghan culture an important part of their daily lives.
She and her husband are the beaming parents of two curious, rock star children and an African Grey parrot.

The Queen of Hearts (2018)
Kimmery Martin
"Tragedy and secrets refuse to stay buried in this fast-paced and clever exploration of the storied connection between Emma and Zadie. As wives, mothers, and physicians, they are just as susceptible to life and its multicolored traumas as any of the souls they care for."

The Storm (2018)
Arif Anwar
"Arif Anwar's The Storm is a brilliantly textured tapestry exploring the natural and man-made disasters that define a human story. And like a true storm, it is by turns devastating, humbling and cathartic."