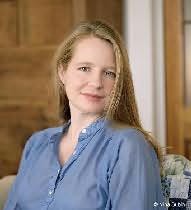 (b.1971)
Samantha Hunt was born in 1971 in Pound Ridge, New York. The Seas is her debut novel - it won the National Book Foundation's award for writers under 35 and was voted one of the Top 27 Books of 2004 by the Voice Literary Supplement. She is also the author of The Invention of Everything Else which was shortlisted for the Orange Prize 2009. Her short fiction and essays have appeared in The New Yorker, McSweeney's, Esquire, A Public Space, Cabinet, Tin House, Seed Magazine, New York Magazine, Blind Spot, Harper's Bazaar, and The Believer. Her work has been translated into seven languages. Samantha Hunt teaches writing at the Pratt Institute in Brooklyn, New York.

Spaceman of Bohemia (2017)
Jaroslav Kalfar
"Jaroslav Kalfar has spun an unforgettable tale, a poignant interplanetary work that collapses the distance between us with the beauty of its language and the unstoppable wonder of this universe he's created."

A Little More Human (2017)
Fiona Maazel
"Maazel is a brilliant acrobat, leading a reader to unimagined sights with humor, wonder, and vibrant intelligence. Surefooted and powerful as DeLillo, Maazel lands it perfectly every time."

Heart-Breaker (2018)
Claudia Dey
"Devoted as I am to the oddities of remote northern lands, I could not put this book down. By turns hilarious and harrowing, Heartbreaker’s icy exactitude is direct, disturbed, and entirely splendid."

Severance (2018)
Ling Ma
"In a breathtaking mash-up of now and just a hair beyond now, Ling Ma’s apocalypse glistens with terror, humor, anger, and humanity. I promise, you will not be able to stop reading this ingeniously constructed and electrifyingly harrowing book."

Leave the World Behind (2020)
Rumaan Alam
"Here in your hands, wrapped in the delicious cloth of suspense, Leave the World Behind begs us to ask the most important questions. How do we let the other in? Where do we draw the borders of home? A prescient book, built for these strange times, sure to entrance and electrify."