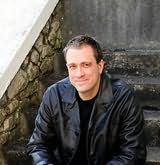 Steven James is the best selling author of more than three dozen books, including the Patrick Bowers and Jevin Banks thriller series. In May 2014 he released the first book of his teen suspense trilogy, Blur, and a book on the craft of novel writing, Story Trumps Structure. Stevens other works span a variety of genres including non fiction, fantasy and drama. He has received wide critical acclaim including two Publishers Weekly starred reviews, three Christy Awards, and as a finalist for an International Thriller Award. Publishers Weekly calls him "[A] master storyteller at the peak of his game."

Steven is an active member of International Thriller Writers, the Authors Guild, Mystery Writers of America, and International Association of Crime Writers. He is also a contributing editor for Writer's Digest. He has a master's degree in storytelling and has taught writing and creative communication around the world. When he's not writing or speaking, you'll find him trail running, rock climbing, or drinking a dark roast coffee near his home in eastern Tennessee.

The Thin Black Line (2015)
(Mike Walton Thriller, book 1)
Simon Gervais
"Drawing from his military and tactical training, Gervais offers up a crisp, taut thriller that action fans can really sink their teeth into."