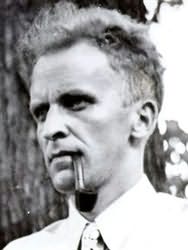 Born in New York City, New York, Jim Kjelgaard is the author of more than forty novels, the most famous of which is 1945's "Big Red." It sold 225,000 copies by 1956 and was made into a 1962 Walt Disney film with the same title, Big Red. His books were primarily about dogs and wild animals, often with animal protagonists and told from the animal's point of view.

Anthologies edited
Hound Dogs and Others (1958)