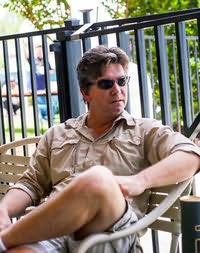 (b.1963)
John Ringo had visited 23 countries and attended 14 schools by the time he graduated high school. This left him with a wonderful appreciation of the oneness of humanity and a permanent aversion to foreign food. He chose to study marine biology and really liked it. Unfortunately the pay was for beans. So he turned to quality control database management, where the pay was much better. His highest hopes were to someday upgrade to SQL Server, at which point, he thought, his life would be complete. But then Fate took a hand: John has become a professional science fiction writer, and is in the early stages of becoming fabulously wealthy, which his publisher has assured him is the common lot of science fiction writers who write for Baen Books. In addition to his own enthusiastically received military SF series-A Hymn Before Battle, Gust Front, When the Devil Dances, and now Hell's Faire-he is collaborating with New York Times best-selling author David Weber on a new SF adventure series: March Upcountry, March to the Sea, and March to the Stars, with more to come.

With his bachelor years spent in the airborne, cave diving, rock-climbing, rappelling, hunting, spear-fishing, and sailing, the author is now happy to let other people risk their necks. He prefers to write science fiction (both alone and in collaboration with David Weber) raise Arabian horses, dandle his kids and watch the grass grow. Someday he may even cut it. But not today. Maybe tomorrow. Maybe he'll just let the horses eat it.

Series contributed to
Bolo (with Linda Evans)
13. The Road to Damascus (2004)

A State of Disobedience (2003)
Tom Kratman
"Probably the most realistic depiction of a second American Revolution ever written."