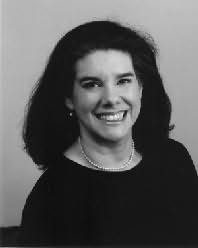 (Mindy L Klasky)
Mindy Klasky learned to read when her parents shoved a book in her hands and told her that she could travel anywhere in the world through stories. She never forgot that advice.

Mindy's travels took her through multiple careers. After graduating from Princeton University, Mindy considered becoming a professional stage manager or a rabbi. Ultimately, though, she settled on being a lawyer, working as a litigator at a large Washington firm. When she realized that lawyering kept her from writing (and dating and sleeping and otherwise living a normal life), Mindy became a librarian, and she now manages a large law library.

For years, Mindy's dating life was a travel extravaganza as well. She balanced twenty-eight first dates in one year, selecting eligible gentlemen from sources as varied as Washingtonian magazine ads, Single Volunteers of D.C., and supposedly-certain recommendations from best friends. Ultimately, she swore off the dating scene entirely. After two years of carefully-enforced datelessness, she made one last foray onto Match.com, where she met her husband – on her first match.

Mindy's travels have also taken her through various literary genres. In addition to her Red Dress Ink books, Mindy has written numerous short stories and six fantasy novels, including the award-winning, best-selling The Glasswrights' Apprentice.

In her spare time, Mindy quilts, cooks, and tries to tame the endless to-be-read shelf in her home library. Her husband and an often-changing-number of cats do their best to fill the left-over minutes.

Washington Warders
1. The Library, The Witch, and The Warder (2018)