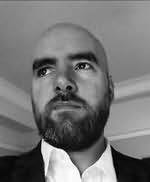 David Lyons is a former award-winning journalist who always held ambitions to become a published fiction author. He grew up in Dublin and currently spends his time between Birmingham in the UK and the Irish capital. He is married to a Brummie, Kerry, and they have one daughter, Lola.

After 12-years of working with a number of national newspapers, magazines and websites – mainly in the areas of sport and music – David decided his work in journalism was not conducive to his creative writing aspirations.

He took the brave decision to move away from his media career and went on to obtain a BA Hons Degree in Creative Writing through Open University. He has taught Media, Creative Writing and English Literature at schools and colleges in both the UK and Ireland.

He had a fascination with fiction writing from a very young age and found the works of George Orwell intriguing as a school student. He considers himself a big fan of Gillian Flynn and has found inspiration in fellow Irish writer Liz Nugent in recent years. He is a writer of psychological thrillers.