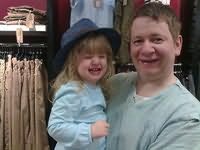 David Leadbeater is the Kindle International Bestselling author of 4 books - all in the Matt Drake series. He was born in Pontefract, U.K., and grew up in Stockton-on-Tees and York. He reads all kinds of fiction and has been writing since he was fifteen.


He lives in York, U.K. and is married with two beautiful daughters and is currently hard at work writing the next Matt Drake novel. He loves to interact with readers and welcomes all genuine contact through social media or email.

Gray Justice (2011)
(Tom Gray, book 1)
Alan McDermott
"Gray Justice is a well written, fast-paced thriller that starts with a terrible tragedy when Tom Gray's son is killed by a car thief. What follows is a clever and demanding look at the inadequacies of the British punishment system and an exploration of what we, the reader, might do if we were ever put in a similar situation. (…)This is a book that will be enjoyed by all who love a well-planned story combined with thrilling action and a deeply scarred, but very capable and likeable hero."
Visitors to this page also looked at these authors
Ernest Dempsey
Andy McDermott
Alex Lukeman
Chris Kuzneski
James Rollins
Jeremy Robinson
Steve Berry
Greig Beck
Clive Cussler
Matthew Reilly
David L Golemon
J Robert Kennedy
Scott Mariani
David Wood
David Gibbins
James Becker