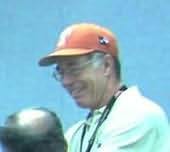 (b.1942)
Gentry Lee is a successful science fiction novelist, a futurist, a space systems engineer, a computer product designer, a television producer, and an incurable knowledge junkie.

From 1968 to 1976 Gentry Lee held a variety of engineering leadership positions on the Viking mission, the first robotic spacecraft to land on another planet. Viking successfully placed two landers on the planet Mars in the summer of 1976. As director of Science Analysis and Mission Planning on Viking, Mr. Lee was responsible for the daily activities of all two hundred Viking scientists during the five months of the active lander missions on Mars. Later, when Mr. Lee returned to space engineering, he was the chief engineer for the design of the Galileo spacecraft between 1981 and 1986. Galileo, launched in 1989, is still in orbit around Jupiter.

Between 1976 and 1980, Gentry Lee was partner to the late Carl Sagan in the creation, design, development, and implementation of the COSMOS television series, an Emmy and Peabody award-winning science documentary that was eventually seen in more than sixty countries. For the past twenty-five years, Mr. Lee has also been giving lectures all over the world on subjects related to the future, space, and science and technology. His informative and anecdotal speeches cover such topics as the challenges that will face the human species in the 21 st century, the exploration of the planets, extraterrestrials in fact and fiction, the significance of libraries in history, and the critical importance of science literacy in Western democracies.

Mr. Lee continues to be active in engineering consulting work as well. He most recently served in a significant advisory capacity for NASA's Lunar Prospector mission that discovered water on the Moon. In addition, he is a member of the prestigious Science Council providing advice and direction to NASA's new Institute of Advanced Concepts (NIAC).