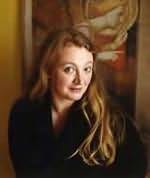 (b.1959)
Amanda Craig was born in 1959, and brought up in Italy and Britain. Educated at Bedales and Clare College Cambridge, she worked in advertising and journalism before becoming a full-time novelist. She is currently working on a children's novel, The Witch King. She has two children, lives in London and contributes regularly to the Times, The Sunday Times, The Independent on Sunday and The New Statesman.

Getting Over Edgar (1999)
Joan Barfoot
"A delightful novel - wise, tender, and perhaps the funniest ever written about the difference between the male and female response to the mid-life crisis."

Before the Knife (2002)
Carolyn Slaughter
"Written with such beauty, courage and truthfulness that it will rank with other masterpieces about life in Africa."

Good Clean Fun (2004)
Michael Arditti
"[These stories] simply and elegantly break your heart. They deserve a wide audience, and will create a wiser one."

Sugar Money (2017)
Jane Harris
"A vivid, perfectly paced tale of slavery and freedom, innocence and experience, love and despair, Sugar Money is told in an unforgettably beautiful language. What a stunning writer Jane Harris is, mastering an extremely harrowing and complex subject and making it into art."

The Skylarks' War (2018)
Hilary McKay
"The Skylarks' War is bloody brilliant, the kind of classic that rings with beauty and conviction and heart-stopping emotion. Not read a novel this good since Eva Ibbotson died."

The Snakes (2019)
Sadie Jones
"I was absolutely gripped by this original and beautifully-told story of a couple enmeshed in a nest of vipers -- a rich family of criminals. Its evocation of a sinister French house, the corruption of love and the powerlessness of good is both haunting and chilling. Nobody contemporary writes about unhappy families as well as Sadie Jones."

On Hampstead Heath (2021)
Marika Cobbold
"With On Hampstead Heath, Marika Cobbold has rebooted the Hampstead Novel for the 21st century. Instead of focussing on its usual topics of middle-class adultery and delusions of grandeur, she has written about unexpected love, work and how truth can change even the most unprepossessing of situations. Like the heroine of a screwball comedy, her heroine Thorne is prickly, witty and memorably bonkers. A delightful novel."
Visitors to this page also looked at these authors
Anne Perry
Robert Harris
Val McDermid
Nora Roberts
Deborah Crombie
Alexander McCall Smith
Michael Collins
Peter May
Rennie Airth
Rebecca Tope
Anna Jacobs
Louise Penny
Julie Hyzy
Kimberley Chambers
Clare Mackintosh
Angela Marsons