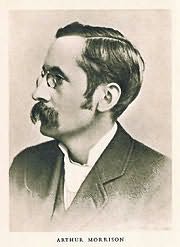 (1863 - 1945)
Arthur George Morrison was an English author and journalist, known for his realistic novels about London's East End and for his detective stories. In 1890 he left his job as a clerk at the People's Palace and joined the editorial staff of the Evening Globe newspaper. The following year he published a story entitled A Street which was subsequently published in book form in Tales of Mean Streets (1894). Around this time Morrison was also producing detective short stories which emulated those of Conan Doyle about Sherlock Holmes. Three volumes of Martin Hewitt stories were published before the publication of the novel for which Morrison is most famous: A Child of the Jago (1896). Other less well-received novels and stories followed, until Morrison effectively retired from writing fiction around 1913. Between then and his death, he seems to have concentrated on building his collection of Japanese prints and paintings. Amongst his other works are Martin Hewitt: Investigator (1894), Zig-Zags at the Zoo (1894), Chronicles of Martin Hewett (1895), Adventures of Martin Hewett (1896) and The Hole in the Wall (1902).
Series
Martin Hewitt, Investigator
Martin Hewitt, Investigator (1894)
The Chronicles of Martin Hewitt (1895)
Adventures of Martin Hewitt (1896)
The Red Triangle (1903)
Best Martin Hewitt Detective Stories (1976)