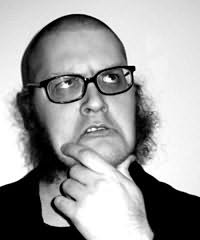 (b.1977)
MELLICK III writes trashy squishy child-like novels set in surreal fantasy versions of consumer America, with an emphasis on nightmarish absurdities, punk perversions, and social satire. In only a few short years, his surreal counterculture novels have drawn an international cult following despite the fact that they have been shunned by most libraries and corporate bookstores. Though frequently compared to David Lynch, Kurt Vonnegut, and even South Park, CM3 is unlike anyone you've experienced before. His influences range from offbeat children's book authors such as Dr. Suess and Roald Dahl to Japanese cult directors such as Takashi Miike and Shinya Tsukamoto to trashy B-movies such as those from Troma and John Waters.

Chemical Gardens (2006)
Gina Ranalli
"It's like a fucked up version of The Wizard of Oz, with punk rockers."

Whargoul (2010)
Dave Brockie
"Just like his music, Brockie's writing is as gore-filled as all fuck."