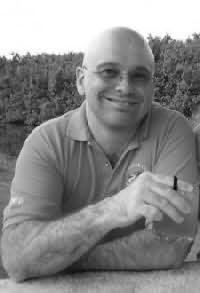 (b.1967)
Kelly David McCullough is a contemporary American author of Fantasy and Science Fiction novels living in Wisconsin. His critically acclaimed WebMage was released in 2006, followed by Cybermancy in 2007 CodeSpell in 2008, MythOS in 2009, and Spellcrash in 2010. Some of his 20 published short stories include The Uncola and When Jabberwocks Attack; he also has written a number of poems, including The Bees: An Edgar Allan Pooh Poem. His non-fiction work includes an illustrated collection that is part of a robust middle school physical science curriculum that was funded by the National Science Foundation and has been adopted by several state boards of education, the Interactions in Physical Science curriculum.Before succeeding as a published author, McCullough acted in the Minnesota Renaissance Festival, the Colorado Renaissance Festival, and the Arizona Renaissance Festival. He lives with his wife, Laura, and a number of cats.Awards include the 2000 "Writers of the Future" winner, an international competition begun by L. Ron Hubbard.In 2008, he donated his archive to the department of Rare Books and Special Collections at Northern Illinois University.

Skyborn (2015)
(Seraphim , book 1)
David Dalglish
"Once you pick up Skyborn you won't want to put it down...I expect this series to fly off the shelves."

For the Killing of Kings (2018)
(Ring-Sworn Trilogy, book 1)
Howard Andrew Jones
"For the Killing of Kings is a fast, fun swords and sorcery tale in the grand style, but updated for a modern reader. Magic, mayhem, betrayal, reversal, sword fights, court intrigue--this book hits all the right notes and has a great time doing it. Jones' Altenerai are a great addition to the heroic tradition--imagine Mercedes Lackey's heralds recruited from a bar in Fritz Leiber's ?Lankhmar and you'll get something of their flavor. If you enjoy my Fallen Blade books you will find a lot to like in this novel."
Visitors to this page also looked at these authors
Juliet Marillier
Mark Lawrence
Anne McCaffrey
L E Modesitt Jr
Weston Ochse
Colleen McCullough
Andy McDermott
Alex Bledsoe
Brian McClellan
Jacob Peppers
C J Cherryh
Stephen Lawhead
Patricia A McKillip
Glen Cook
Jack McDevitt
Sharyn McCrumb