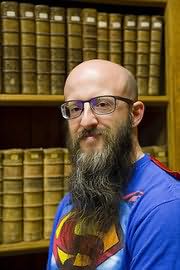 (b.1974)
Jim C. Hines is best known as a fantasy novelist and the guy who did those gender-flipped SF/F cover poses. His first novel was Goblin Quest, the tale of a nearsighted goblin runt and his pet fire-spider. Actor and author Wil Wheaton described the book as too f***ing cool for words, which is pretty much the Best Blurb Ever. After completing the goblin trilogy, Jim went on to write the princess series, four books often described as a blend of Grimms Fairy Tales with Charlie's Angels. He's currently working on the Magic ex Libris books, which follow the adventures of a magic-wielding librarian from northern Michigan.

He has an undergraduate degree in psychology and a Masters in English, and works for the State of Michigan. He lives with his wife and two children, who have always shown remarkable tolerance for his bizarre and obsessive writing habits. (The cats, on the other hand, have no tolerance whatsoever, and routinely walk across his desk when he's trying to work.)

A Natural History of Dragons (2013)
(Memoir by Lady Trent, book 1)
Marie Brennan
"Lady Trent is the Jane Goodall of dragonkind, and I'm glad she's finally sharing her story with the world."

City of Stairs (2014)
(Divine Cities, book 1)
Robert Jackson Bennett
"A rich, layered, thoughtful story, full of gods and magic and char-acters that feel unflinchingly true. . . . Every once in a while I read a book that's so well done, I find myself wanting to punch the author in the face out of pure envy. Congratulations, Mr. Bennett- you just made the face- punching list!"

Binti (2015)
(Binti, book 1)
Nnedi Okorafor
"Nnedi Okorafor's imagination and worldbuilding are unparalleled, as are the heartfelt emotional struggles she creates."