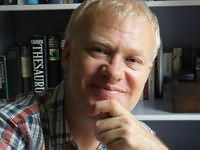 Paul Mendelson wrote stories at school when he should have been doing other things, but went on to become the, then, youngest ever playwright performed at the National Theatre, with his play, "You're Quite Safe With Me". This was followed by further work for theatre and, briefly, for television.
For twenty years, Paul has written on mind sports, such as bridge, poker and casino games, becoming the UK's best-selling author within his genre. He has contributed to magazines and newspapers worldwide, has a weekly bridge column in the Financial Times, and also writes interviews and features.
His debut crime novel, "The First Rule of Survival" is published in 2014, with the sequel the following year. Set in Southern Africa, the novels have allowed his creative writing once again to come to the fore, and the perfect excuse to return to his beloved Cape Town to gain inspiration and time to write.

Paul lives in London (and, sometimes, Cape Town) with his two and four-legged family